” It is an uncommon syndrome occurring due to the overproduction of aldosterone, the potent salt retaining hormone.”

2.] This syndrome is more common in females than males.

3.] This syndrome is more common in people having age between 30s and 40s.

The condition primarily results due to adrenocortical disease as follows :

Following are the symptoms of Conn’s syndrome : 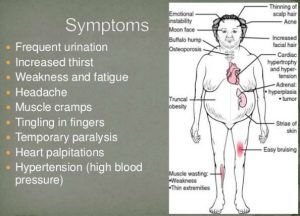 The above image is taken for education purpose only, from printerest.com

The principal features of conn’s syndrome are as follows :

1.] In Conn’s syndrome, all the following are seen except ?

2.] Primary hyperaldosteronism is characterized by ?

4.] Life saving hormone is secreted by ?

c. Both of the above

6.] Corticosteroids are secreted by ?

7.] Blood pressure is controlled by ?

8.] Which gland is concerned with salt equilibrium in body ?

9.] Epinephrine and non – epinephrine together known as ?