Proteins are the structural and functional constituent of the body. Regular supply of dietary proteins is essential for the cell integrity and its functions. dietary proteins produce nitrogen which metabolized by the body

Proteolytic enzymes which are produced by the stomach, small intestine and pancreas perform the breakdown of proteins into its amino acids. Digestion in mouth of proteins does not occur, protein digestion starts from stomach

The below diagram explains the transport of L-amino acids across the intestinal membrane. 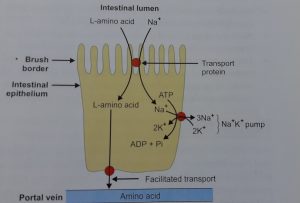 1. Where do digestion of protein takes place?
A. Mouth

E. All of the above

2. What stimulate the secretion of gastrin?
A. Pepsin

3. What is the daily protein requirement of an adult man?

4. Pepsin breaks the peptide bond of which type of protein?
A. Aromatic amino acid

A. Both are same

B. No,  renin regulates water balance and rennin function is to clot milk

C. No,  rennin regulates water balance and renin function is to clot milk

7. Which of the following is pancreatic enzyme?
A. Aminopeptidase

9. What is the inactive form of elastase?
A. Pro elastase

D. none of the above

10. Through which vein, amino acids after digestion reaches the liver?

D. none of the above

13. Aminopeptidase breaks which terminal of peptide bond?
A. C-terminal

14. Which of the following breaks the C-terminal of peptide bond?
A. Aminopeptidase

15. Which of the following is a zinc containing enzyme?

7. All of the above
8. Exopeptidase consist of elastase, trypsin etc
9. Pro elastase
10. Hepatic portal vein
11. Chymotrypsinogen
12. Break peptide bond of aromatic amino acid
13. N-terminal
14. None of the above
15. Carboxypeptidase