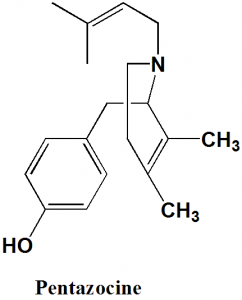 SAR for morphine analogues can be summarized as follows:

ii. The above formed compound is then reacted with 4-methoxybenzyl magnesium chloride to give 2-methoxybenzyl-3,4-dimethyl-1,2-dihydropyridine.

iv. Intramolecular alkyation and simultaneous demethylation of the resulting compound leads to formation of 2-hydroxy-2,5,9-trimethylbenzo-6-morphane.

vi. On alkylation of the resulting product by 1-bromo-3-methyl-2-butene gives pentazocine.[1] 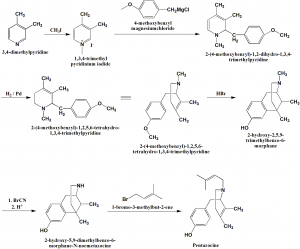 Pentazocine is used for:

Side effects Pentazocine are:

Q.1 Choose the correct option related with the mechanism of action of drug Pentazocine?

a) Acts as Opiate receptor antagonist

a) Treatment of diarrhea

b) As an anesthetic

Q.3 Which amongst the following are the correct statements with respect to the SAR of drug Pentazocine?

I. Replacement of alcoholic hydroxyl with  -OC2H5  makes the compound 2.4 times more active than morphine.

II. Replacement of alcoholic hydroxyl with –OCOCH3 will also activates the compound by 4.2 times.

III. Replacement of alcoholic hydroxyl with ketone group inactivates the compound and makes it lesser active.

Q.4 Number of chiral carbons present in the structure of Pentazocine is?

Q.5 Correct sequence for the True/False for the physiochemical properties of the drug pentazocine is?

Q.6 Correct statements for the IUPAC nomenclatures of the drugs are?