Rods and cones are named differently according to the appearance of outer segment. the outer segment of rods have rod-shaped and those of cones have cylindrical or cone-shaped. Transduction of light energy into receptor potential (conversion of light energy into electrical signals) occurs in the outer segment of rods and cones. The photo-pigments are the integral proteins in the plasma membrane of outer segments. The inner segment contains Golgi  complex, mitochondria etc. The one end of photo-receptors is an expanded bulb-like synaptic terminal. these terminals are filled with synaptic vesicles.

The first step in transduction is absorption of light by the photo-pigments. the rods have one type of photo-receptor known as rhodopsin; while the cones have 3 photo-pigments, one for each type of cone. All photo-pigments which are associated with vision have 2 parts- a glycoprotein known as opsin and the derivative of vitamin A called retinal. Retinal is light absorbing part of all visual photopigments.

The photopigments reacts to light in following steps-

As studied earlier, the chemical changes that takes place during the isomerization leads to the production of receptor potential. In darkness, the Na ions flow into the photoreceptors outer segment through a ligand. this ligand is known as cGMP( cyclic guanosine monophosphate). The inflow of Na ions is known as dark current.

The visual pathways include two events- 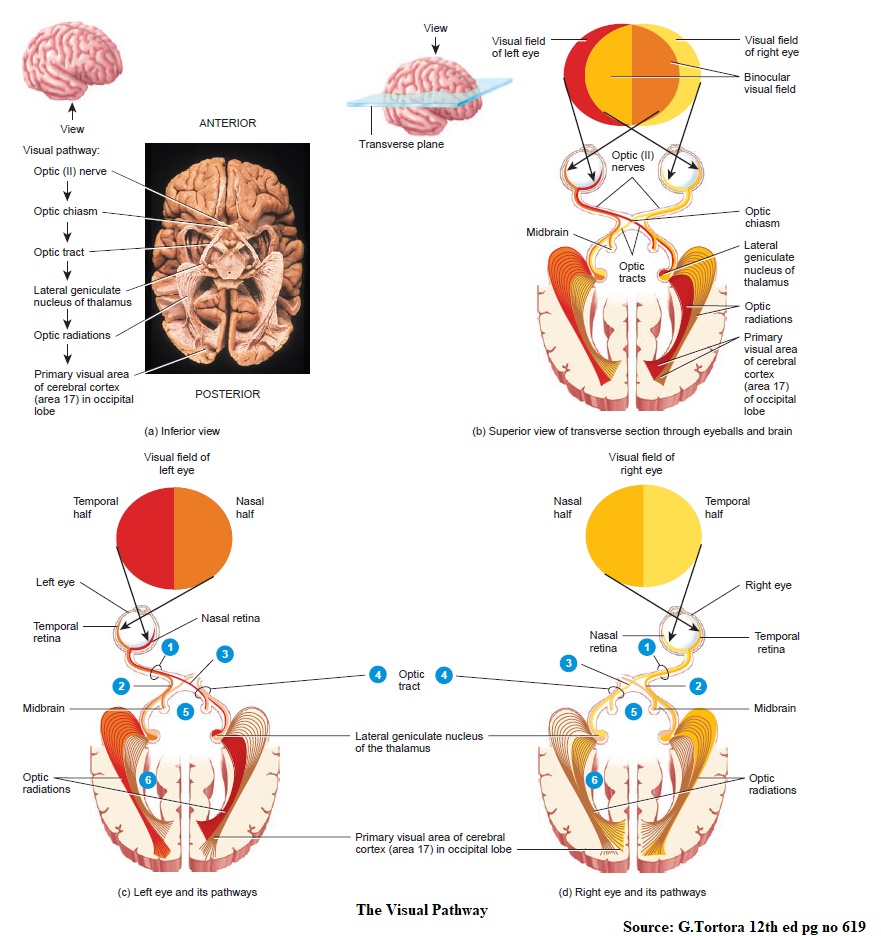 1. Which organ facilitates the physiology of vision?
A. eye B. ear
C. nose D. tongue

3. The inner segment of photoreceptors contains?
A. mitochondria B. golgi complex
C. cell nucleus D. all of the above

5. The retinal part of photopigment is a derivative of?
A. vitamin A B. vitamin B12
C. vitamin c D. vitamin k

6. In which step the chemical changes takes place?
A. isomerization b. bleaching
C. regeneration D. none of the above

7. Which of the following statement is NOT true?
A. axons of optic nerve first crosses optic chiasm
B. inflow of Na ions is known as light current
C. cGMP releases glutamate
D. during regeneration, cis retinal fits back into opsin part

9. which of the following are involved in brain pathway?
A. horizontal cells B. amacrine cells
C. ganglia cells D. none of the above