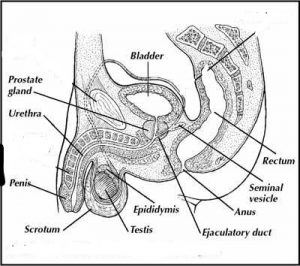 The organs of male reproductive system are described as follows:-

it is a bunch of skin, connective fibrous and smooth muscle tissue.it is divided in two compartments, each having one testis and one epididymis. it lies below the pubic symphysis behind the penis.

In each testis, there are 200-300 lobules and within each lobule are 1-4 convoluted loops of epithelial cells known as seminiferous tubules.

The spermatic cords suspend the testes in the scrotum. Each cord contains testicular artery, testicular veins lymphatic vessels and testicular nerves. the cord is covered with the sheet of smooth muscle, connective and fibrous tissue and extend through the inguinal canal and is attached to the testes on the posterior wall.

these are two small pouches of fibrous tissue and smooth muscle and are about 5cm long and lies on the posterior side of the bladder. At its lower end, each vesicle opens into a short duct, which joins with the deferent duct to form an ejaculatory duct.

the ejaculatory ducts are the two tubes of about 2cm and each formed from the seminal vesicles and deferent duct (ductus deferens). they pass through the prostate gland and carries the seminal fluid and spermatozoa to the urethra. their walls are composed of smooth muscle and fibrous tissue.

It lies in the pelvic cavity in front of the rectum and is completely surrounding the urethra when it comes from the bladder , outer layer is fibrous covering and inner glandular part is covered with smooth muscle. It weighs about 8g in youth and at the age of 50, the weight increases to 50g.

The penis has a root and a shaft. the root lies in the perineum and the shaft or body is externally visible and is the movable portion of the penis. It is formed by the erectile tissue and smooth muscle present in the form of cylindrical mases. The erectile tissue is supported by fibrous tissue and has a great blood supply.

7. What are the characteristics of the shaft part of the penis?
A. externally visible  b.movable part of the organ
C. both A and B D. none of the above

8. Which of the following statement is NOT true?
A. within each lobule of testis are the seminiferous tubules
B. the seminal vesicles contract and expel their stored contents
C. the deferent duct passes downward from the testis through the inguinal canal
D. tunica vasculosa consist of no. of capillaries.

9. Which structure is formed from the union of the seminal vesicles and deferent duct?
A. ejaculatory duct  b. prostate gland
C. urethra D. spermatic cords

10. Which organ works as a passageway for both urine as well as semen?
A. penis B. testis
C. spermatic cords D. none of the above