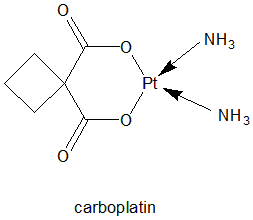 Carboplatin falls under the category of Antineoplastic cytotoxic drug. [1]

i. It introduces the alkyl groups to the DNA. When repair enzymes tries to remove the alkylated fragments, they fragment the DNA.

iii. It binds with DNA and produces cross-linkages.

iii. It induces mispairing of the DNA causes mutations in the cells.[2]

i. Cisplatin is reacted with silver nitrate to form cis-diamino-(1,1-cyclobutandicarboxylate)platinium(II).

ii. The above formed compound is then reacted with cyclobutan-1,1-dicarboxylic acid to form carboplatin.

Carboplatin is used for the treatment of:

Carboplatin is also used for the preparation of the germ cells and during the bone marrow transplant.

Q.1 Which term is associated with the drug carboplatin?

Q.3 The drug Carboplatin shows its action through?

a) Introduction of tyrosyl group

b) Alkylation of DNA

Q.4 The correct order for the synthesis of the drug carboplatin is?

I. Reaction of cisplatin with silver nitrate

Q.5 Predict the incorrect statements from the following with respect to the classification of the drug.

I. Vincristine is an epipodophyllotoxin

II. Cytarabine is a pyrimidine antagonist.

III. Carboplatin is an antineoplastic drug.

IV. Flutamide is an antiandrogen.

Q.6 The correct sequence of True and False for the given statements with repects to the side effects of drug Carboplatin is?

I. Low blood count is a common side effect.

III. Central neurotoxicity is a less common side effect.