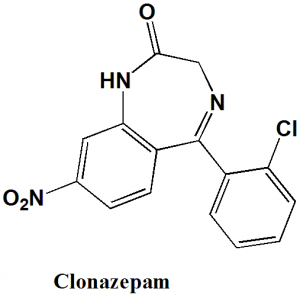 Clonazepam is a benzodiazepine derivative.

ii. The amino group of the above formed compound is amidated by 2-bromoacetyl bromide to produce bromoacetamide.

iii. Bromoacetamide is coverted into aminoacetamide by reaction with ammonia.

iv. On reaction with pyridine, the above formed compound cycled into 5-(2-chlorophenyl)-2,3-dihydro-1H-1,4-benzodiazepine-2-one.

v. Upon nitration, clonazepam is synthesised. 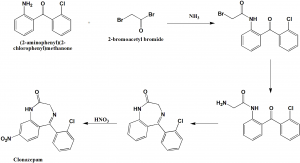 Clonazepam is used for:

Side effects of Clonazepam are:

Q.2 Correct melting point of the drug Clonazepam is?

III. Prevention of conversion of arachidonic acid to thromboxane.

Q.5   Correct sequence for True and False for the given statements related with the SAR of Clonazepam drugs?

Q.6 Type of ring present in the structure of clonazepam?

Q.7 The drug Clonazepam is used for?

a) Prevention of seizures

b) Control of seizures